I always find it difficult to choose final pictures and I would normally involve the client in the selection of images; in this case the model worked tfp and the model was pleased to have images of this quality for her portfolio.

My method was to put the pics for each ‘look’ into a folder (digital – 34 looks and film – 10 looks). I then choose the best pic from each folder. That resulted in about 35 pics to whittle down.

I have chosen from both digital and film cameras but the tonal quality of the film pictures stands out and is most representative of the pictures taken of Hepburn at the time.

Underneath each picture I have summarized why I have chosen that image although on any given day I’d probably choose a different ’10’! At least there were quite a few great pics to choose from! 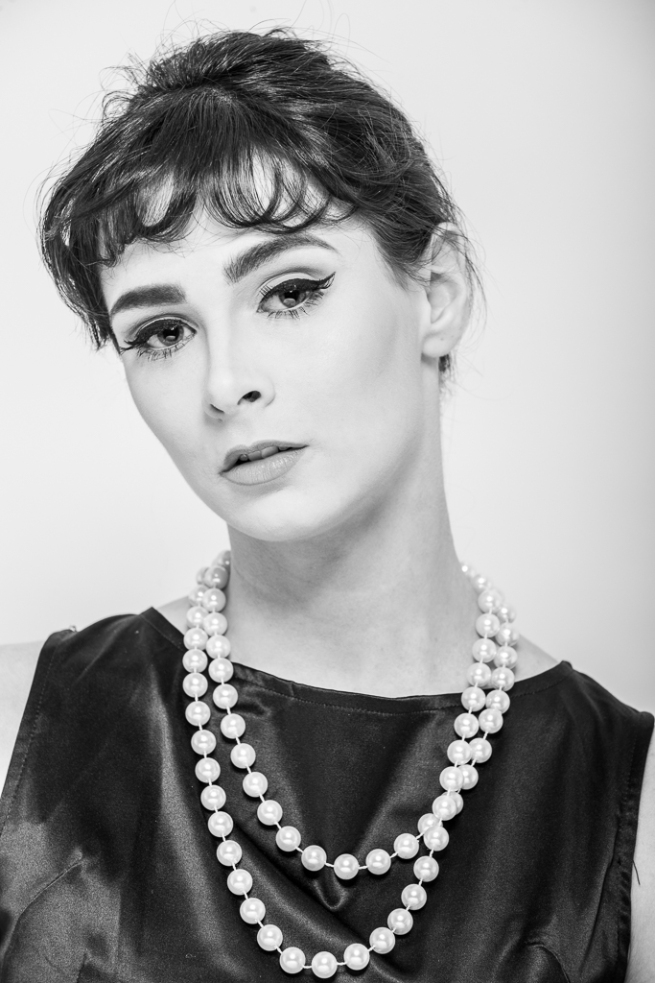 This picture is most reminiscent of the soft feminine Hepburn look. The black round neck dress and the pearls. Most of all the head tilt, the face shape and the part open mouth all give that ‘look’. The lighting was a medium sized beauty dish with a white reflective surface so it was soft. A reflector was used to fill in the neck area and both can just be seen in the eyes as catch-lights. Adjusting the lights to give a medium f8 aperture gives a sharp plane for the eyes but softens back to the ears giving a gentle drift out of focus (shot at 150mm at 1.5m to subject).

Some of the pics I researched had a hat as a style device. We found one like those hats and I think it contributes to the ‘look’. I also like the tight crop from 170mm . The hat frames the face  (on a 1/3rd) and the viewer is drawn to the eyes and mouth. 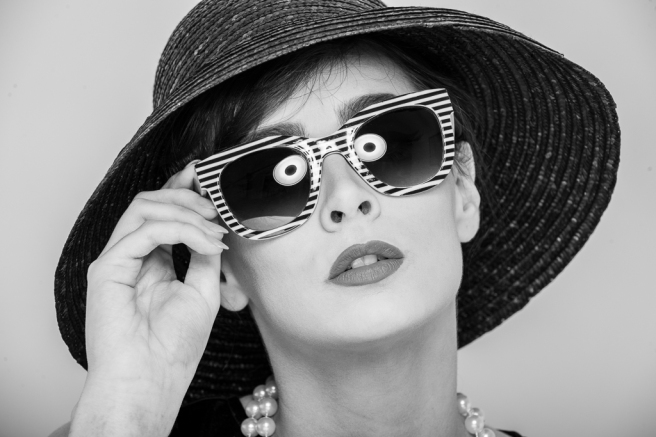 We also found some period styled sunglasses and whilst shooting realized the reflection of the beauty dish adds a cool, eye-like, focal point to the picture; a bit playful and fun. A modern twist. 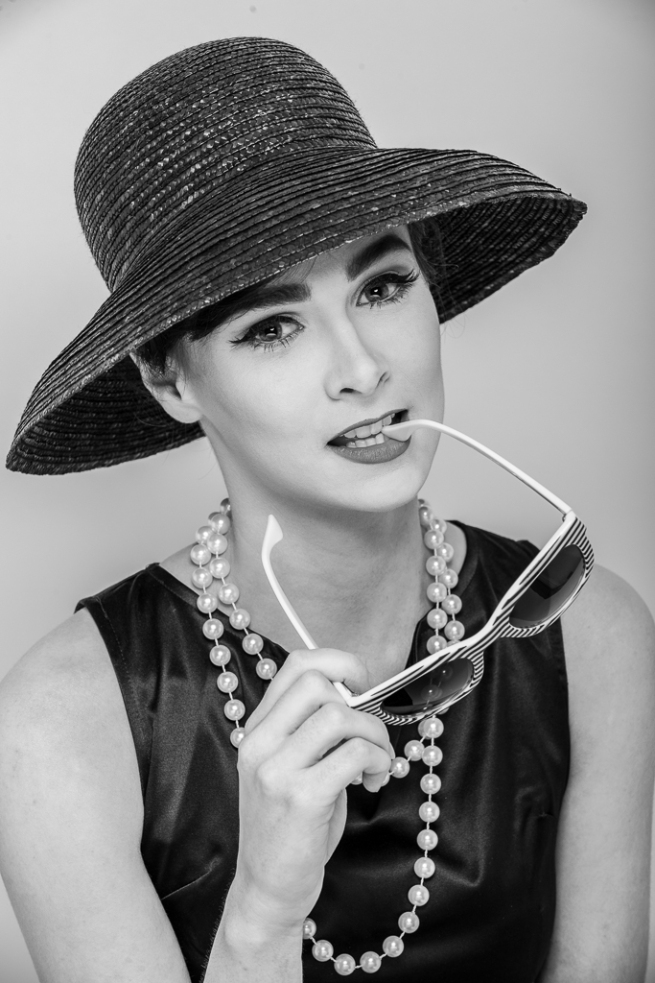 I wanted the eyes to come to the fore so the glasses were dropped at a diagonal similar to the hat angle and a wider shot, 105mm, brought more of the model in shot. 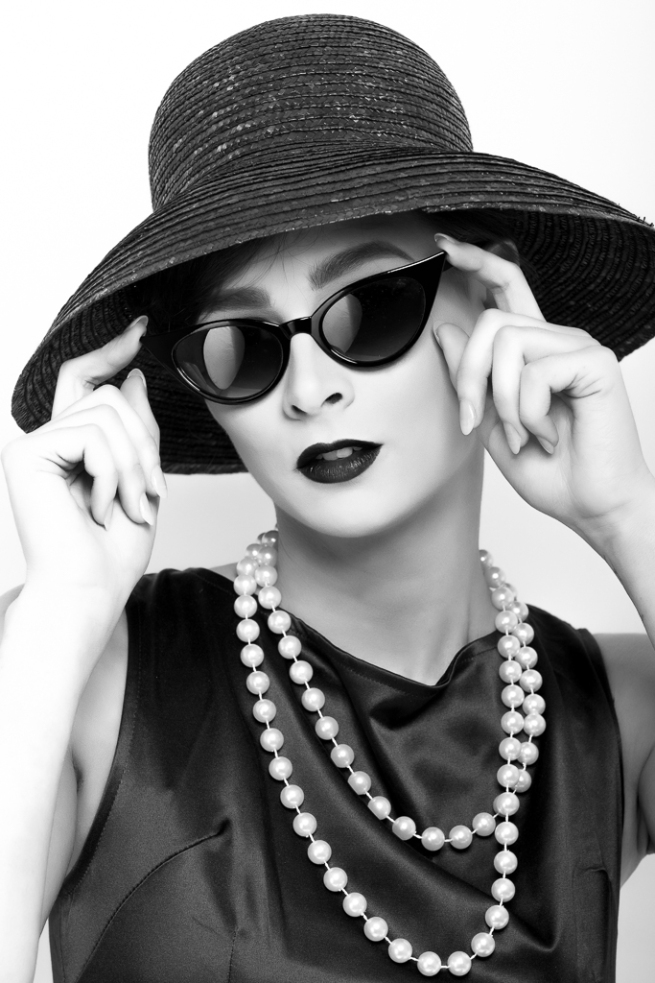 One of my favorites! Less Hepburn though! These are a pair of red 60’s sunglasses but with a black and white conversion I could manipulate the red to become black so it all tones in. I have smoothed the skin on this one and the porcelain effect is awesome! I have a square crop of this picture on my study wall!

Back to a Hepburn look for this one and again using a hat as a style device. In a number of Hepburn pictures she is looking away from the camera and slightly tilting her head and this picture recreates it well.

A tighter crop of the 60’s glasses shot on film. The blacks are richer and the grain adds character to the image. The digital one above is crisp and clean, exacerbated by the processing, but whilst I really like the digital version the film one has a depth of character not matched by digital.

Another film image; a tighter framed shot which has the benefit of a shallow depth of field so the the back of the hat it nicely out of focus causing the view to return to the face. The head is slightly tilted as per Hepburn and it makes a nice diagonal. 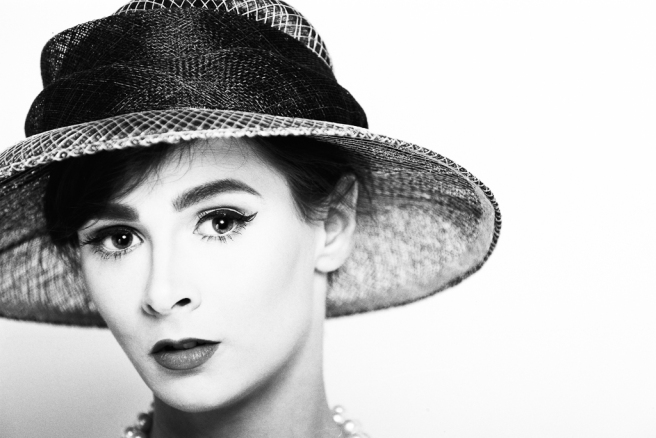 Another film shot. I liked the back of the hat being out of focus so opened the lens to, if I recall correctly, f4 and just used the modelling light. The picture is a bit soft but that adds to the feel of the era. The tonal quality in the out of focus areas and the face is fantastic. This is the other top favorite of mine and is the masthead at the top of my blog home page!

The last one of my ’10’ is another film shot and is a lovely shot of Frankie. The tones of the face, the look in her eyes, the richness of the blacks and the fine grain; love it!

The images individually and collectively work harmoniously together as a set of images. They are evocative of the era, all monochrome and the different media complement each other.  The concept, the styling, the make-up, the posing and the post-edit treatment came together in a way that delivered what I set out to do.

Frankie, as usual was fantastic! She was patient as she followed precise directions for holding her head as we worked together to recreate the poses. We had a laugh doing it too!

The make-up artist managed to re-create the look and the whole stylistic intent came together around Frankie.

Like a lot of things combining modern technology with classic materials give a fantastic result. Modern lenses / optics with film emulsion, scanned to hi-res digital files to allow fine tuning in post edit is an unbeatable classic look and I am very pleased with the results.

Delivering the shoot from concept to realisation and managing the whole project has developed my skill set and given me confidence to shoot more big productions on location.

I set out to deliver an Audrey Hepburn inspired portrait shoot. In a studio, recreating 50s/60s lighting, headshots of the era, black and white and shoot 35mm film.

I have done all that through this shoot!