Techniques and methods we can use when taking documentary photographs

• Give you an idea of how to present your subject

• Historical information – who are they?

Research is important to understand the chosen area and the people involved to avoid missrepresentation  and care should be taken to ensure journalistic independence and just as importantly integrity and truthfulness in story telling.

•Make sure your photographs flow as a series

•Colour or black and white?

Laura advised us that when presenting a series, make sure we decide on a style before entering the location. We can change through editing, but we’re much more likely to develop a story through photographs if we decide on this beforehand. The best way to tell a story is through a variety of close up shots, as well as wide angle.

•Make sure you have permission

•Decide on your gear

She said documentary photography is all about planning and being fast during the time we have been given. Laura warned us about carrying too much equipment. Its better to shoot simple – choose one camera, and maximum three lenses. One wide angle, one close up at least.

•Be prepared to talk to people

•Remember – if you’re nice to someone, they’ll be more likely to allow you to take their photograph!

What is visual language?

Visual language is a way of allowing your photographs to communicate with the world and the viewer.

Laura said musicians use music to convey a message, writers use words and a photographer uses pictures!

How to use narrative in our series

A story or an account of a sequence of events in the order in which they happened.

The art or process of telling a story or giving an account of something.

You can create a narrative using the following types of shots:

As Laura talked about photographs flowing as a series and the use of narrative to tell a story I was reminded of a book I got for Christmas 2015. “A  graphic novel/photo-journal is a record of one reporter’s arduous and dangerous journey through Afghanistan, accompanying the Doctors Without Borders.

Didier Lefevre’s photography, paired with the art of Emmanuel Guibert, tells the powerful story of a mission undertaken by men and women dedicated to mending the wounds of war.”

It is a superb account told using a mix of black and white photographs with French cartoonish illustrations laid out in a comic strip style. 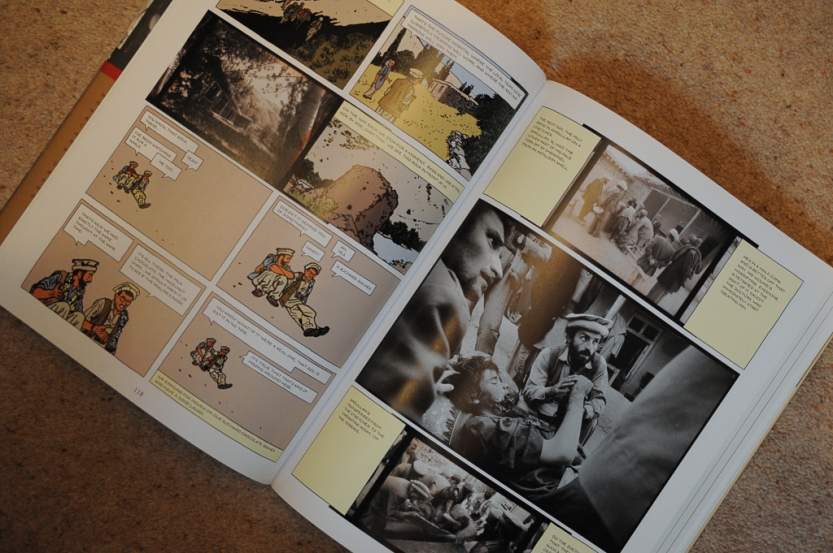 It works superbly well and the humorous style contrasts the hardship and difficulties faced delivering medical aid to those who need it most.

This was the most powerful for me. I am not a great fan of the whimsical titles attached to photos to make the mundane appear interesting but Laura showed us this picture…

… a simple picture of a couple close and in a relationship. However, add the words and there’s a powerful change. A different way of engaging with the photograph.

“This photograph is my proof, there was that afternoon when things were still good between us and she embraced me, and we were so happy. It did happen. She did love me. Look, see for yourself.”

It becomes a moment in a story that the viewer may engage in and wonder what went before and what came after. He seems to be using the photograph as evidence, asking the viewer to accept the proof. Maybe even trying to convince himself. Suddenly it changes to sad vulnerability.

The exercise was to take a series of photographs, taking inspiration from the theme “COLOUR”. So, Claire said ‘canteen’. Hmm, not much there I thought! On entering the empty canteen I was struck with the all pervading, omnipresent branding for Coca-Cola! The red of Coke was everywhere! Not matter which direction I looked in, there was the brand. The contrast is marked with a corporate canteen that I frequent where branding and healthy living is prevalent and here, in a college with youngsters was a bombardment of advertising to choose unhealthy sugary drinks as part of ‘healthy’ diet! 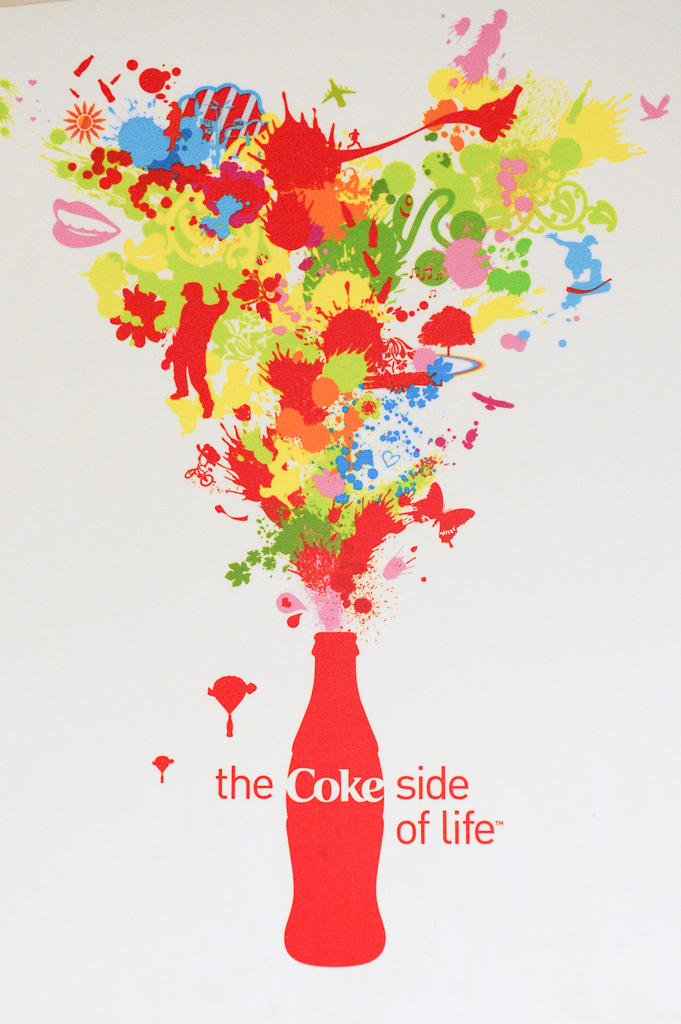 Even a mural of, presumably the diverse student community, was set against the red of Coke. I don’t even know if its an advert or just a mural but the co-incidence is striking!